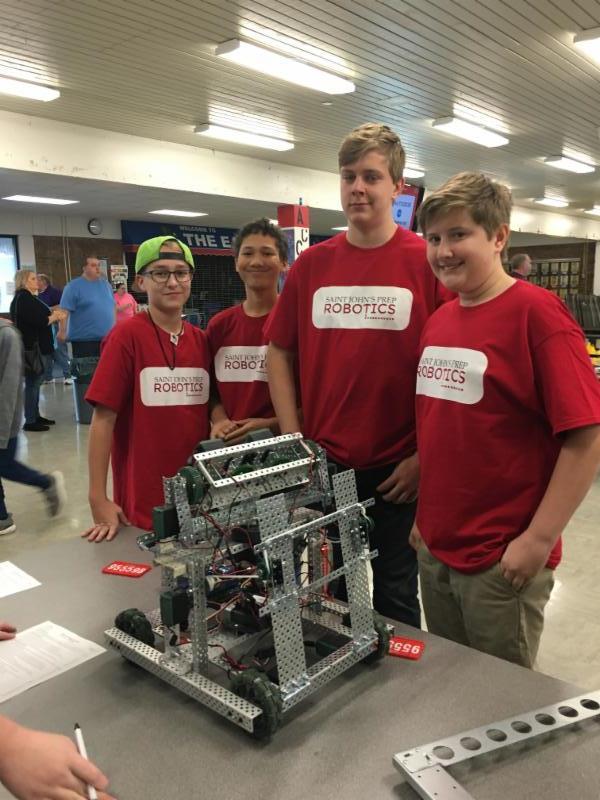 This past week the Robotics Team met at Apollo High School. This was the first of two meets this year, and really the first opportunity both teams have had to test their robots.

Team A (YaBoi) had technical challenges from the start, and were continuously working to better the robot during the day.  They succeeded and ended up being selected as a third alliance partner in the elimination rounds. Kudos to the team for their indomitable spirit.

Team B (USSB) quickly found their robot had a competitive advantage scoring the heavy mobile goals and honed this skill as the day went on.  They too were chosen as a third alliance partner and advanced to the elimination rounds. Their entire team executed nearly flawlessly throughout a long day.

Team A met Team B in the first elimination match, and Team B delivered a knock-out blow scoring 3 mobile goals.  Team B moved on to the semi-finals where they ran into a strong alliance from Mankato East and Windom.  Despite losing the match, Team USSB qualified for the Minnesota State VEX tournament for reaching the semi-finals!  In addition, Team B received the tournament “Energy/Spirit” award, which is given to the team that shows the most enthusiasm for robotics and the event.